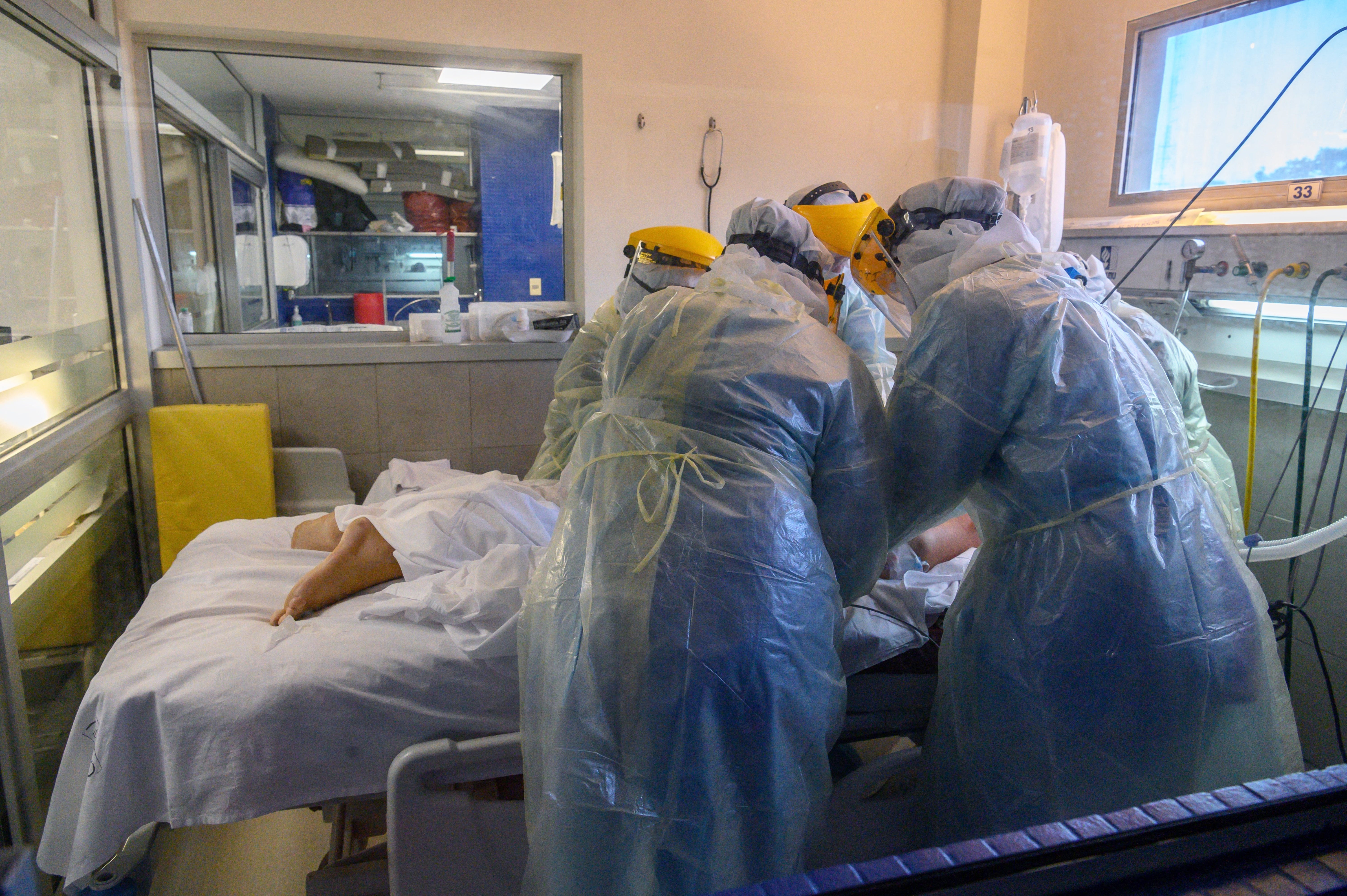 Once looked to as a global model for how to respond to the COVID-19 pandemic, Uruguay has in recent months lost its grip on the coronavirus SARS-CoV-2. It’s now one of several countries in South America struggling to control a wave of infections.

Uruguayan scientists say a mix of complacency—fuelled by the country’s early success at controlling the virus—and the challenges posed by a particularly transmissible SARS-CoV-2 variant are to blame.

“We were a model in 2020,” says Rafael Radi, a biochemist at the University of the Republic in Montevideo. “Unfortunately, things are not following the same path in 2021.”

For all of last year, the 3.5-million-person country recorded only about 19,100 cases of COVID-19 and 180 deaths from the disease. But it has already reported more than 341,000 infections and 5,100 deaths this year, according to the online publication Our World in Data, maintained by researchers at the University of Oxford, UK (see ‘Uruguay’s surge’). On several occasions in May and June, it recorded the world’s highest number of COVID-19 deaths per capita.

In the past week, however, new infections and deaths have dropped, thanks to the country’s swift vaccine roll-out, says Radi—giving hope that the country can rein in the virus once more.

Uruguayan scientists and representatives attributed the country’s early success at keeping the pandemic in check to government officials following the advice of the Honorary Scientific Advisory Group (GACH), a team of 55 multidisciplinary science experts led by Radi. In March 2020, after the country confirmed its first COVID-19 cases, the government swiftly shut down businesses and schools, and restricted travel at its borders, on the basis of the group’s recommendations.

“We got many things right,” says Radi. “The coupling of health, science, government and society in 2020 was almost perfect.”

At the same time, scientists—including Gonzalo Moratorio, a virologist at the Pasteur Institute and the University of the Republic, both in Montevideo—realized that Uruguay would need COVID-19 tests to identify and then isolate people who are infected, and that the country couldn’t rely on purchasing those kits from other nations. So the researchers developed their own, and eventually achieved one of the highest testing rates per capita in Latin America—second only to Chile. Thanks to widespread testing, and an aggressive contact-tracing system put in place by Uruguay’s Ministry of Health, the country was able to break transmission chains before they could grow exponentially. On several occasions in 2020, Uruguay reported no new daily infections.

But all of that changed in 2021. COVID-19 cases began climbing in December. The GACH once again recommended restrictions, such as border closings, but government officials did not implement all of them. For instance, they did not close restaurants because it would have harmed the economy, says Radi.

“This really persistent first wave we are suffering is way beyond the Tetris strategy,” says Radi. “We have lost track of a large proportion of cases.”

Stuck in the middle

Another reason for Uruguay’s recent spike is the country’s geography, researchers say.

Although COVID-19 has receded in some parts of the world, it is raging in South America. The continent is currently reporting the five highest rates of weekly COVID-19 deaths per capita in the world.

Uruguay is wedged between two of the region’s hotspots—Argentina and Brazil—where infections have been driven in part by a highly transmissible variant of SARS-CoV-2 called P.1, or Gamma. Some Uruguayan cities, such as Rivera, press against the border with Brazil, making travel restrictions between the countries ineffective there.

In February, less than 15% of all viruses sequenced in Uruguay were the Gamma variant—but in Rivera, that figure stood at 80%, says Rodney Colina, head of the molecular-virology laboratory at the University of the Republic in Salto, Uruguay.

Leakage of the Gamma variant into Uruguay was especially bad during the summer holidays, held early in the year, when family and friends came together rather than staying socially distanced. Scientists now detect the variant in nine of every ten sequenced virus samples nationwide, says Radi.

But the Gamma variant is only one part of the equation, Uruguay’s scientists say. Paradoxically, the country’s early success in containing the pandemic probably played a part in the loss of control in 2021.

“National authorities claimed victory too early,” says Moratorio. “Fear of the virus was lost because of all the good things we had done before.”

When case numbers surged, Uruguay should have locked down to bring them back to manageable levels, says Zaida Arteta, secretary of the Medical Union of Uruguay and a member of the Uruguayan Interdisciplinary COVID-19 Data Analysis Group, which monitors the pandemic.

“We had several opportunities to get back on track with our epidemiological tracing, but instead we continued opening up and moved from a strategy of containment to mitigation,” she says.

The office of the Uruguayan president and the Ministry of Public Health did not respond to Nature’s queries about why they chose to not follow the GACH’s recommendations to enact restrictions the second time around.

Government officials weren’t the only ones to let their guard down when it came to COVID-19. Researchers say that compliance with social-distancing recommendations waned in 2021 because the people of Uruguay were confident in how the pandemic had been managed, and in the COVID-19 vaccines. The first shots were administered in Uruguay on 1 March.

Research published by the GACH that month found that, although the majority of Uruguayans think that COVID-19 is a severe disease, only one in three thought they themselves would get infected within the next six months.

“Though infections were increasing, there was a general sense that things were under control or getting better,” says Radi. “In fact, they were getting worse.”

So far, about 43% of Uruguayans have been fully vaccinated, and 63% have received at least one dose of a COVID-19 vaccine. The country has the second-fastest vaccination programme in South America, and on 9 June began administering jabs to people aged 12 to 17.

Positive COVID-19 cases have decreased by more than one-third in the past week. For those who have been vaccinated, admissions to intensive-care units have dropped by more than 92%, and deaths have plummeted by more than 95%, according to a study by Uruguay’s Ministry of Public Health.

So experts remain cautiously hopeful. “It’s not over yet, we still have dozens of serious cases and expect more deaths,” says Arteta. “But the vaccine roll-out is one of Uruguay’s strengths. They are efficacious, and we are vaccinating very well and quickly. I hope the trend continues.”

This article is reproduced with permission and was first published on June 25 2021.

Share this on WhatsApp Post Views: 0 The hubbub around mutations in the virus that causes COVID-19—and how they might make it more infectious—has been around since the early phase of the pandemic. A preprint study about a particular mutation involving the “spikes” studding the SARS-CoV-2 pathogen had previously drawn attention, and that investigation has […]

Share this on WhatsApp Post Views: 2 COVID-19 is different from the viral epidemics of the recent past in a few ways: it is more widespread than severe acute respiratory syndrome, more infectious than seasonal influenza and has killed more people than Ebola. And it is different in the way that epidemiologists are tracking its […]

Share this on WhatsApp Post Views: 0 A significant melt event is unfolding in Greenland this week. With temperatures nearly 20 degrees Fahrenheit higher than usual in some areas, the southern part of the ice sheet is melting at its highest rate this season. Forecasts suggest that the melting on Greenland’s South Dome—one of the […]

Posted on October 2, 2020October 2, 2020 Author admin
We use cookies on our website to give you the most relevant experience by remembering your preferences and repeat visits. By clicking “Accept”, you consent to the use of ALL the cookies.
Cookie settingsACCEPTREJECT
Manage consent