Junglee Pictures’ Badhaai Do is doing the rounds amongst audiences and every update about the film adds to the excitement. The film is a part of the same franchise as the 2018 release Badhaai Ho that won a National Award and had also garnered praises from audiences and critics alike. The film stars Rajkummar Rao and Bhumi Pednekar, who have been shooting in Mussoorie and Dehradun since last month. The behind-the-scenes pictures shared by the actors on their social media are much loved by the fans and they are waiting to see an awesome fun-filled show when the film releases. This film is the first collaboration between the two co-stars and both of them say Badhaai Do is exactly what they were looking for, perfect in every sense. Rajkummar Rao shares, “Working with Bhumi is great. She is immensely talented and I’ve been following her work. There is so much growth in her as an actor. I was looking forward to working with her and I was not finding a good script. Then Badhaai Do came our way and we both jumped at the chance.” 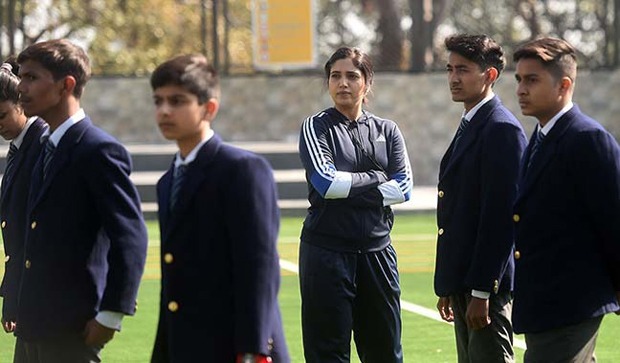 Bhumi Pednekar adds, “Raj has been a revelation for me. I thought he would be someone who’s very serious and a bit of an introvert, but he’s not like that – at least not in this film. He is a blast to work with and a fantastic actor. Both of us were looking for the right film to collaborate on, and there couldn’t have been a better collaboration than Badhaai Do.” Director Harshavardhan Kulkarni is all praises for the fresh pair, he says, “Both of them are very hard working. They’re always trying to fine-tune their craft and improve upon it, so there are some times when I say that is enough and they say, ‘let’s try a little more’. That’s been the best part about shooting with them. They also challenge me and I need to be on my toes all the time when I am working with these two.” Speaking about the film Rajkummar says, “Badhaai Do is such an amazing script. We have been having so much fun shooting for the film as it is packed with great comedy and has nicely etched out characters. I am playing this cop named Shardul Thakur. This is my first time playing a cop, so I’m really looking forward to it.” Bhumi Pednekar takes on the role of a PT teacher as ‘Sumi’ in the film.

Badhaai Do is produced by Junglee Pictures, helmed by Harshavardhan Kulkarni, and written by Akshat Ghildial and Suman Adhikary.

ALSO READ: Video: Rajkummar Rao plays cricket on the sets of Badhaai Do and Bhumi Pednekar shares a cool BTS

EXCLUSIVE: Tik Tok star Mr Faisu reacts to the ban on Tik Tok; says he had the most followers in the country : Bollywood News

Share this on WhatsApp Post Views: 0 On June 29, 2020, popular mobile application Tik Tok was banned from India permanently. However, Tik Tok was not only a source of entertainment, but the Bytedance-owned app had emerged as a major source of income for several content creators. Many creators had worked years to generate millions […]

Abhishek Bachchan grows out his beard while shooting for Dasvi in Agra Jail : Bollywood News

Share this on WhatsApp Post Views: 0 For Dasvi, the new political satire that Abhishek Bachchan is shooting in Agra as you read this, the actor has not only lost considerable weight but also grown a beard. Which is weird for his daughter Aaradhya as she doesn’t like her Pa with a beard. But what to do? The […]

Share this on WhatsApp Post Views: 0 Late actor Irrfan Khan’s sons Babil and Ayaan are currently working on a new music album as a tribute to their father. Babil, the elder of the two sons, took to his Instagram stories to share a glimpse of the two brothers working on the album. In the […]

46 Years later, Amitabh Bachchan is reminded of Deewar as he shoots for MayDay; here’s why : Bollywood News

Posted on May 24, 2020 Author admin
We use cookies on our website to give you the most relevant experience by remembering your preferences and repeat visits. By clicking “Accept”, you consent to the use of ALL the cookies.
Cookie settingsACCEPTREJECT
Manage consent