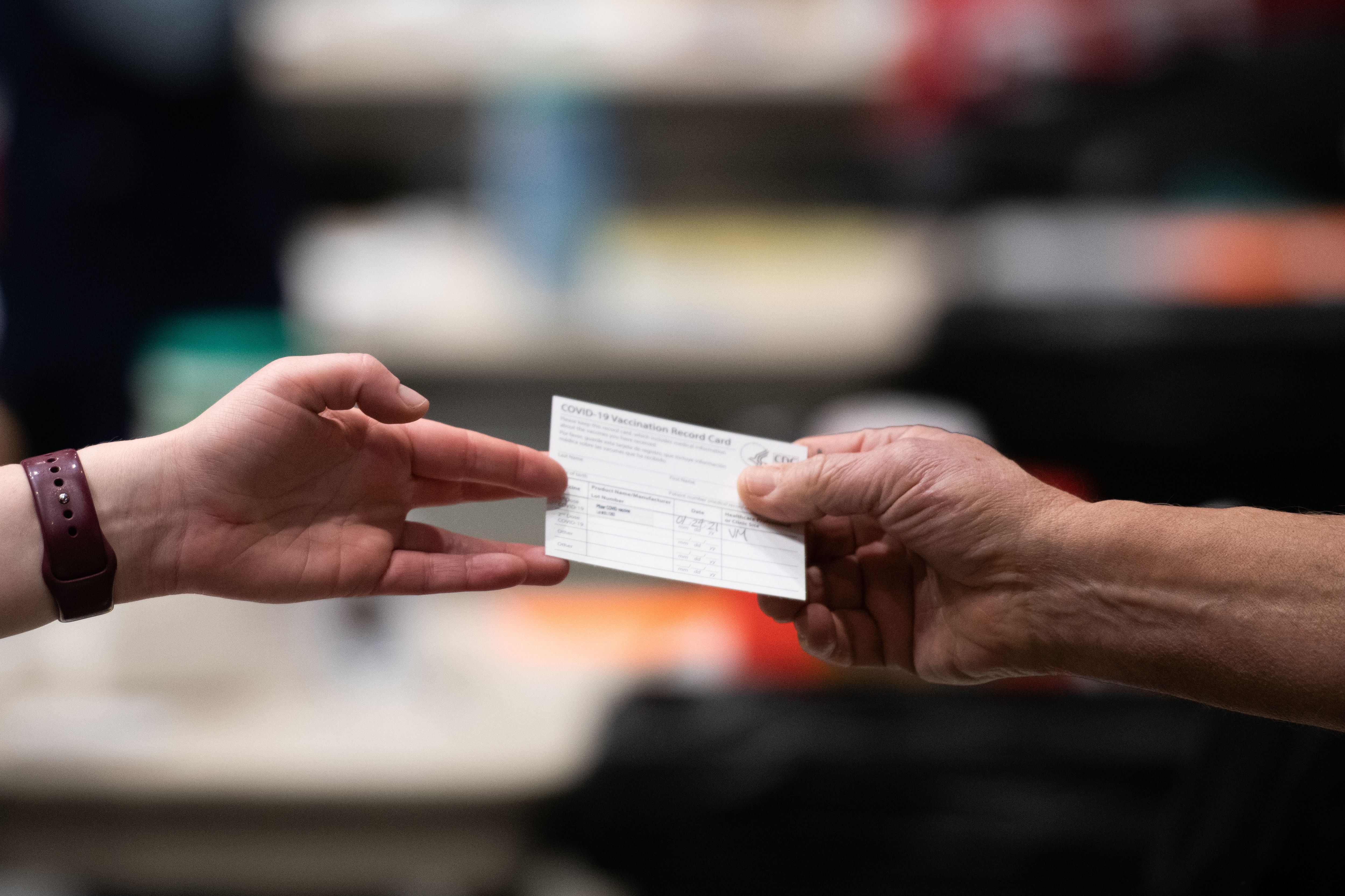 The items below are highlights from the free newsletter, “Smart, useful, science stuff about COVID-19.” To receive newsletter issues daily in your inbox, sign up here.

The chances that you will get a “breakthrough” infection with SARS-CoV-2 despite being vaccinated more than two weeks ago (with both doses in the case of a two-dose COVID-19 vaccine) are “quite low, but not zero,” according to a 4/20/21 post at Dear Pandemic. The chances of this occurring are 0.0077%, the post states. Breakthrough infections are not surprising because some also occurred during large-scale human studies of the vaccines. A total of 95% fewer such infections occurred among study subjects who received the Pfizer COVID-19 vaccine than among subjects who didn’t, for instance. But, obviously, that means some infections (8 out of 18,198 people vaccinated versus 162 in the similarly sized group of people who were not vaccinated) did occur among those receiving the vaccine. “The number of breakthrough infections depends heavily on the level of transmission around you — if there is very little virus circulating there is hardly any chance for you to have a breakthrough infection,” write “Those Nerdy Girls” at Dear Pandemic. So, vaccinated people should continue to avoid crowded indoor spaces and wear a mask “when you can’t avoid close contact in public,” the post states.

A 4/17/21 piece by Allyson Chiu at The Washington Post offers some safekeeping tips for that white vaccination record card, if you are fortunate enough to have been vaccinated by now in the U.S. First, snap a photo of it and store the card in a safe place where you can retrieve it if necessary. Second, don’t carry it around; keep it secure, says a George Washington University Medical Faculty patient safety officer who is quoted in the piece. Third, don’t laminate the card because health care workers might add information to it later, such as any COVID-19 boosters you get, the story states. If you lose the card, return to the place where you were vaccinated (the 2nd place, if you received a 2nd dose at a different location than the 1st) and ask for a replacement. Failing that, you should be able to request a replacement from your doctor’s office or state health department, according to the deputy director of Immunization Action Coalition, a non-profit that focuses on increasing immunization rates and creates educational materials about immunizations.

“Concerns about blood clots with Johnson & Johnson underscore just how lucky Americans are to have the Pfizer and Moderna shots” [against COVID-19], writes Sarah Zhang at The Atlantic (4/14/21). Last year, the Moderna and Pfizer vaccine development efforts looked like long shots because they both relied on as-yet unproven messenger RNA (mRNA) technology. The Johnson & Johnson and AstraZeneca approaches looked like “medium bets” at the time, with both relying on a modified adenovirus to carry a gene with instructions for building SARS-CoV-2’s “spike protein.” Now that a very small number of recipients of the J&J and AstraZeneca vaccines have suffered blood clots that might be linked to the adenovirus approach, the “risky bet” made by the U.S. on the mRNA vaccines “looks like a good one,” Zhang writes. “The unusual blood clots” have not shown up among recipients of the mRNA vaccines. However, “the rest of the world has been banking on the J&J and AstraZeneca vaccines,” Zhang writes. So “if the blood-clot risk is real…the U.S. will be fine; the rest of the world will face difficult questions about balancing the risks and benefits of an affordable, good-but-not-best vaccine against a disease that has killed nearly 3 million people” in the past year and a half, Zhang writes. Other vaccines that rely on adenovirus technology include Russia’s Sputnik V, China’s CanSino, and J&J’s Ebola vaccine, the story states. The story also describes two historical examples of how authorities have responded to vaccines for potentially dangerous diseases (polio and rotavirus) that are associated with rare cases of risky complications.

How did New Mexico become the first U.S. state to reach more than half of its adults with at least one dose of a COVID-19 vaccine, including relatively high numbers of Black, Hispanic and Asian people, despite a high poverty rate and a population with many health challenges? For starters, the state committed to a single registry for vaccine appointments, set up by the state’s health department, reports Dan Goldberg at Politico (4/12/21). In addition, the state partnered with tribal leaders and U.S. Indian Health Services to reach nearly one-third of Native Americans in New Mexico, so far, the story states. “The state’s public health challenges wound up helping speed vaccine distribution, because public health officials had so much experience dealing with communities most likely to struggle getting vaccinated,” Goldberg writes. Mobile clinics and pop-up clinics near churches helped reach homeless people and people who were undecided about vaccination, the story states. The state chose a strategy of allocating more doses to high-need communities and to reaching its elderly population, most of whom are people of color, Goldberg reports. And a centralized and concentrated health care system helped speed up progress too. The state “is now seeing fewer than 200 new infections per day, one of the lowest per capita rates in the country,” Goldberg writes.

Two recent pieces explore the risks of a SARS-CoV-2 infection associated with air travel. The first one is a beautiful interactive at The New York Times that illustrates how air circulates on airplanes, though it doesn’t directly say that it illustrates how SARS-CoV-2 particles circulate in that air. The piece states that passengers constantly breath a mixture of fresh and recirculated air in most single-aisle aircraft (4/17/21). The air enters the cabin through ceiling ducts and exits through vents near the floors. “Half of the air that is sucked out is released from the plane, and the other half is filtered [by two pleated fiberglass HEPA filters] and eventually sent back into the cabin,” the piece states. The piece shows the results of some simulations it developed with researchers of how more than 2 million air particles flow in an airplane cabin and the risks posed by “infectious viral particles,” including what happens to particles when someone sneezes on board. It looks like an individual’s sneeze particles stay confined within clusters of a few rows. “Air is refreshed roughly every two to three minutes — a higher rate than in grocery stores and other indoor spaces, experts say,” the piece states. “The potential risk for exposure may be just as high, if not higher, when people are in the terminal, sitting in airport restaurants and bars or going through the security line,” the piece states (By Mika Gröndahl, Tariro Mzezewa, Or Fleischer, and Jeremy White).

The second air travel piece describes a recent U.S. Centers for Disease Control and Kansas State University study finding that empty middle seats can reduce the risk of a SARS-CoV-2 exposure by 23% to 57% on a single-aisle and twin-aisle aircraft, presumably compared with a full aircraft. The study simulated airborne exposure of unmasked passengers to bacteriophage particles (bacteriophages are viruses that can infect bacteria) as a stand-in for SARS-CoV-2, reports Jacqueline Howard at CNN (4/14/21). “The researchers noted that some virus aerosol can still be emitted from an infectious masked passenger and so distancing [of seats] could still be useful,” the story states. The story concludes with an update on CDC guidance for air travel.

You might enjoy, “Non-COVID-19 passports to reduce your risk to society,” by Zach Zimmerman for The New Yorker (4/19/21).

Share this on WhatsApp Post Views: 0 Scientists sent patterns of electricity coursing across people’s brains, coaxing their brains to see letters that weren’t there. The experiment worked in both sighted people and blind participants who had lost their sight in adulthood, according to the study, published today (May 14) in the journal Cell. Although this […]

To the Angry Grown-Ups in My Town

Share this on WhatsApp Post Views: 0 Please. I know it’s hard right now. I know it’s confusing. I know I’m confused. But they are confused too. The schools we have spent a lifetime saying are so important – stay-in-school-slogans important – have sent them home. The clubs they joined to get into college or […]

Share this on WhatsApp Post Views: 0 Sometimes, discoveries seem so simple. “You know, basically we found a bunch of holes in the ground.” That’s Eduard Reinhardt. He’s an archaeologist and geologist at McMaster University in Ontario, Canada. “But ultimately very important holes in the ground.” Reinhardt and colleagues believe they’ve found some of […]

At an HIV Clinic in Queens, New York, a Sense of Home Hangs in the Balance

Posted on February 7, 2021 Author admin
We use cookies on our website to give you the most relevant experience by remembering your preferences and repeat visits. By clicking “Accept”, you consent to the use of ALL the cookies.
Cookie settingsACCEPTREJECT
Manage consent